Skip to content
Photo 34 MG (Maschinengewehr 34)
The MG 34 machine gun (Maschinengewehr 34) radical. Radical because he introduced the concept of multi-purpose machine senpan and also the use of a belt of ammunition for a weapon that belonged to light. Ammunition is usually provided in the form of a belt containing 50 calibre bullets at 7, 92mm. This can be so that the belt contains a maximum of 5 belt/250 bullets. As an option to use also tromol Saddle (saddle drum) which contains 75 of the same calibre bullet fruit
The machine gun crew of Germany in standby (feuerstellung). Maschinengewehr 34 machine gun is (34 MG). Note camouflage pattern on the stahlhelm unusual! In peacetime, the use of grasses, reeds etc for a means of camouflage should only be done after permission of the commanding officer of the unit. Melaburi helmet with soil, clay or wet sand is forbidden. But of course this does not apply in the field where everything possible is always open! 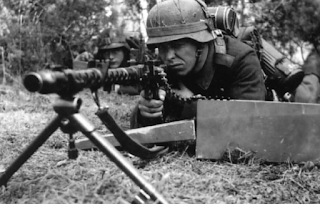 Two-person crew of 34 MG (Maschinengewehr 34) from the Leibstandarte SS Adolf Hitler being in action. At least one of them wearing a double decal M35 stahlhelm with (the left hand Swastika, ϟϟ right) are in general use until 1940. This photo was taken at the time of Unternehmen Barbarossa in 1941
Panzergrenadier from 16. Panzer-Division when it arrived in the western suburbs of the Volga River in Russia, the end of the summer of 1942. A Maschinengewehrschütze (a machine gunner) brought the machine guns of the type 7.92 mm MG-34 over his shoulder as well as 34 Ersatzstücketasche (auto parts bag) in front of the right side of his belt. He is also armed with the Stielhandgranate 24. The people of Germany the regular dub a machine gunner as Abzug (trigger), which means “welder trigger pullers”

A machine gun crews with a casual mencangklong pipe in a Maschinengewehrloch (hole machine gun) while keeping an eye on the Volga River that stretches before him, the end of the summer of 1942. Types of small spherical defense holes is also known by the name of Loch or Russisches Ruslock (hole of Russia). This soldier arming himself with a machine gun MG-34 and a P-38 9 mm pistol (not visible here) which usually carried around using a holster which is mounted on the front left Koppel (belt). The latter is the official name, while the nickname commonly referred to by the Landser was Bauchbinde (emban or puser belt)
The term “Schützenloch für Maschinengewehr” (blast holes for machine guns), better known by the Landser as Maschinengewehrnest (the machine gun Nest). The optical lens of the MG-34 above looks nyempil between two stahlhelm worn by their crews. In Germany, the word “leichte Maschinengewehre” (light) or “a schwere” (heavy) put more emphasis on its role and not the size of his weapon because both equally use machine gun MG-34 7, 92mm. Leichte Schützengruppe (Lightweight Gun Group) equipped with one MG-34 equipped bipod and reserve one or two rifles, while a schwere Schützengruppe (heavy machine gun Group) still carries a machine gun with a bipod for the same, it’s just an extra provided with optical lenses, tripods, as well as a backup gun barrel to enable their crews to provide a sustainable long distance shots. This photo was taken at the border of the city of Stalingrad in September 1942. In the background appear two T-34 tanks Russia burned. From the large number of empty ammunition boxes that are scattered on the back of the machine gun crew, we can know that the Soviet tanks were accompanied by a large number of infantry troops, the majority of it is now strewn lifeless in the expanse of wheat fields! The Mission of the brush run out enemies, better known by the name “Ausradieren” (the total destruction of the Defense position infantry, vehicles, or installation of the opponent)
Two-person crew of the machine gun MG-34 fired their weapons in the direction of the alleged location of the enemy is on the border of the city of Stalingrad, beginning in September 1942. The machine gun is fitted with a Gurttrommel 34 (tromol basket) that holds the belt caliber 7, 92mm contains 50 seeds. A Schützengruppe (Group of rifle) commonly divided into five or six people Schützentrupp (Army Rifle) under the command of Deputy Gruppenführer (Group Leader/Squad), and one Maschinengewehrtrupp (machine gun) consists of three people, plus one person Gruppenführer who normally rank Unteroffizier. Both the above machine gun crew wearing Gummibänder (rubber band) on the stahlhelm they cut from the vehicle and tires serve as camouflage penyemat (leaves)
One squad armed with MG 34 Maschinengewehrtrupp move into their new positions through the streets of Stalingrad which was already filled with the debris. Machine gun group usually carry one or two barrel of reserves,